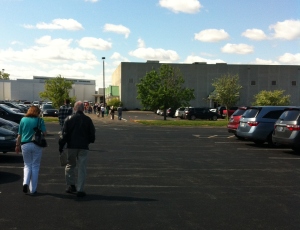 But we aren’t the only ones.  This past week, I found my parking spot at 11:02 and started walking toward the massive building.  There were still cars pulling into the parking lot and I was surrounded by nearly 100 other people who were also in the process of locking their cars, gathering their coffee mugs and making the trek to the sanctuary.

Once inside and seated by my family, we sang some songs and said a prayer or two and watched a video.  I looked over to the main door and another two-dozen people were waiting to enter the auditorium.  I looked at my watch at it was twenty minutes after the hour.

The casual “strolling in” just shocks me.  There are very few events where this is the norm.

People don’t come late to the movies.  They are there early, get their popcorn and soda and enjoy the previews.

They don’t stroll in for job interviews or court dates.

They show up for dinner dates, concerts, football games and TV shows.  These things matter and they are there on time.  But amazingly, for a few folks, missing a third of the service doesn’t seem to bother them.

In my early life, I served a little country church that had 16 people show up on a good Sunday.  We wouldn’t have known what to do with 100 people if they’d walked in the door, early or late!

The church we attend today is a monster.  Multiple-thousands of people fill the seats each week.  Multiple services, in multiple locations provide a variety of attendance options over the weekend.  Thousands of kids attend the children’s programs.  Up to 100 people might be involved planning and performing a single weekend service.  So a few stragglers may not seem to be too out of range when you consider the percent of total attenders who are in place ready to participate from week to week.

And some day, if all things go well, we’ll be on time, too.

View all posts by Curt Austin

What’s Hot on the Acre!